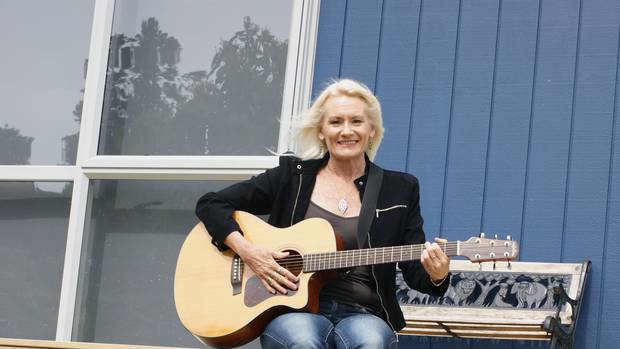 Shirley Howe once declared she was going to be famous rock star.

So the stage name LA Thompson was born — LA for Los Angeles where stars are made and Thompson was a nod to her family.

LA has always had gritted determination to make a name for herself in the music world.
The Katikati singer song-writer is releasing songs off her forthcoming album Re-mixed New Sun Rising, starting with the poignant Changed my Life.

“All songs are relevant to the last five years of my life,” LA says.

”Themes like love, relationships and broken relationships, life’s inspiration and events, my nana dying, it’s all in there,” she says.

Debut single Changed My Life is a nod to the first 40 years of her life.

LA describes this phase of her musical career as a more stripped down approach, a change from the days of full production drums, bass and keyboard. This is her third album and she’s made three EPs.

She also likes singing covers and honouring other musicians’ work.

Her genre is a mash-up of pop country, folk rock fusion with a couple of rock songs thrown in there.

One of her aims is to study to be a sound engineer. LA is accomplished in music production but would like to be able to fully complete her own productions from start to finish so she has total control.

In the leadup to the album release in November, LA can be found at local hangouts, guitar in hand, touring and gigging like a true rock star.

She has 18 shows booked throughout The North Island for the Re-mixed New Sun Rising Tour.

LA established LMM (Local Musicians Music) in 2014, a not-for-profit organisation to help emerging musicians get established in the music scene. She’s helped songwriters get signed to publishers and organised media interviews to help raise their profiles.

She is also a promoter as well and event manger for other organisations.

LA has an extensive career of her own in the music industry, having performed and written her own music from the age of nine (LA was vocalist in original/covers band Road To Amber, The Collective and all-girl band Lace).

See Facebook LA Thompson’s Music for a full list of tour dates, starting in October, including dates in Waikino, Waihi Beach, Katikati (at the Santa parade), Thames, Whakamarama and Tauranga.