Remix is a word used a lot in the music industry. Many of LA’s songs were originally recorded with Andrew Bird based in Mt Roskil, New Zealand.
Several singles, EP’s and as many producers later LA was introduced to Gavin Northcroft in 2014 where she was finally able to bring her album to life. “New Sun Rising” had many of the files lost so a two year vigil of re-recording, mixing and mastering ended with Gavin and her working relationship with another album named “It’s Raining” (available on Spotify and other digital distributers).
A word from Shirley aka LA Thompson “I am very grateful to Gavin for taking the time to record 5 songs from start to finish and several tracks originally produced by Andrew Bird. Being able to retain the music files has ensured my songs will stand the test of time”!

Purchase today and be considered for a very special gift!

I have one handcrafted ukulele beautifully crafted from native New Zealand wood to give away to one of you?
Even if you don’t play it is a good excuse to learn or gift to a friend or family member. 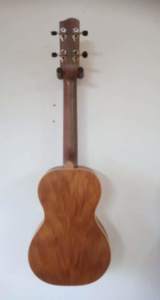